“It is one’s calling to be a part – to participate.” 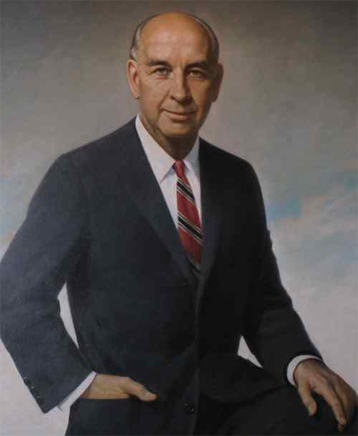 Hugh Daniel was born in Elberton, Georgia in 1906. The Daniel family moved across the Savannah River to Anderson, South Carolina around 1915. Hugh Daniel attended The Citadel in Charleston, South Carolina graduating as valedictorian of the Class of 1929. In 1934 Daniel joined his older brother at Daniel Construction Company. The following year Hugh moved to Birmingham, Alabama and opened the Daniel Construction Company of Alabama. In 1936, Hugh Daniel married Martha Stone Cobb of Vernon, Alabama. Over the next several decades Daniel continued to expand and diversify the construction company, served three years as a lieutenant in the U. S. Navy Civil Engineering Corps and co-founded Central Bank & Trust now BBVA Compass.

When asked about his personal keys to success, Hugh Daniel was quick to respond. Hard work – not for the sake of work, but well-directed, efficient work. Fairness – being fair in everything you do. And delivering what you say you will deliver. These three simple attributes allowed Hugh Daniel to rise from humble beginnings to become a man who spearheaded one of the nation’s largest and foremost construction corporations; a man who provided the impetus to propel his corporation to world prominence in its industry; and a man who silently, without regard for personal gain and notoriety, instituted needed influence into programs designed for the good of the community.

To his adopted home town, Daniel gave many hours of service to various civic, cultural and educational organizations. When asked about his contributions to the community, Daniel replied, “It is one’s calling to be a part – to participate.” His participation in community affairs included serving as a director of the Birmingham Committee of 100, Chamber of Commerce, Baptist Hospitals Foundation, Birmingham Museum of Art, a member of the executive committee of the Board of Trustees of Southern Research Institute, a trustee of the Birmingham Symphony Association, the Advisory Board of the Salvation Army and as a member of the Board of Trustees of Birmingham-Southern College.

In 1978 a private foundation was created in South Carolina. Later that year, the assets of that foundation were split with half remaining in South Carolina and the other half used to create The Daniel Foundation of Alabama. The Daniel Foundation of Alabama remains a viable presence in the philanthropic community of Alabama, supporting educational, health, humanitarian and cultural activities in Birmingham and throughout Alabama.